Variations on a theme. After the absolute predominance of white, Marsotto edizioni now presents a selection of products in Black Marquina marble. The radical contrast produces entirely different effects, as in a sort of reversed image of the objects. Last year, it was the individual lines that stood out. Now it is the piece as a whole that reveals the essence of its design.

The black, non-light, forcefully asserts its presence, emphasizing the character and functionality of each object. Thus the collection acquires a renewed balance: alongside the ethereal lightness of white are the depth, weight and texture that are so ideally expressed in black.

The harmonious proportions that have always been the hallmark of each item in the Marsotto edizioni collection are naturally unvaried, together with that touch of elegance which black cannot but enhance.

And so a veritable metamorphosis has occurred, where the vibrant impact of black actually reinterprets each single piece. Enriching it with emotional, totemic values that strike a chord.

Black was the eagle on the banners of the Holy Roman Empire, symbolizing force and power.
Hamlet’s black clothes express his melancholy. In 1819 Walter Scott, in his poem Ivanhoe, brings on a mysterious black knight who helped heroes win tournaments. The romantic poets sang the night and its obscurity, emphasizing its sweet cruelty.
Depero defines the black shirt as an armour with the capacity to transform its wearer into a mechanical warrior.

And yet, for a long time black was perceived as a non-colour. In 1946, the Maeght Gallery in Paris provocatively titled one of its exhibitions “Black Is a Colour”.
The fashion designer Ennio Capasa, creator of Costume National, maintains that “black is mystery, elegance, transgression, seduction, essence, past and future”. Yohji Yamamoto declares that for him black is a very simple colour, because it helps him to realise form.
“Black”, he claims, “is the conclusion of colours. Due to their mixture, everything becomes black”. And the couturier Maurizio Galante feels that black is “essentiality, but also memory”.

The Marsotto edizioni collection made in white Carrara marble had an everyday appearance.
Declined in black Marquina, it turns aristocratic, rendered inaccessible by this colour-cuirass that outlines and hews figures in space. Their silouettes and profiles seem sharper; what was domestic now looks mysterious. Protected by this chromatic shell, the designs are less expansive, acquiring a new, tacit and lofty elegance.

They are the same as far as their design, intentions, forms and proportions are concerned.
Yet their language reveals a different tone: no longer colloquial, but almost courtly. The blackness stands aloof. Cloaked in inscrutable shadows, it commands respect.

James Irvine,
when he decided that the 2013 collection would be all in black, knew very well that this was
not a variant, but an altogether different project. For white is the colour of dawn, black is that of darkness. 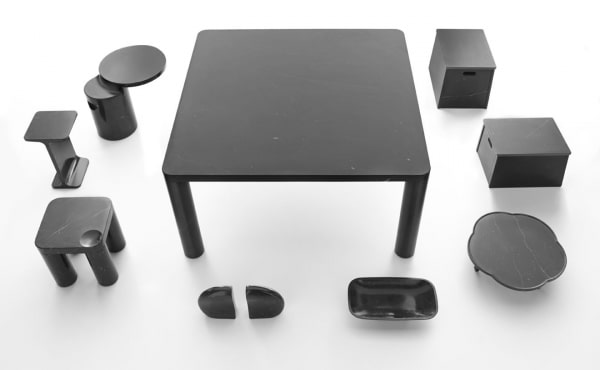